It snowed last night, and my plan was to head up American Fork Canyon to Tibble Fork Reservoir and do some longer hill repeats. The road was unplowed and if not for the construction trucks heading up and down for the dam repair project, there wouldn’t even be a path. Fortunately I managed to get my SUV up to the lake parking and took off up the trail. 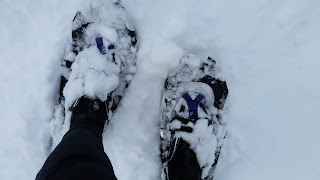 Even snowmobiles hadn’t made it up yet in any great numbers so the trail was really loose, even in the one snowmobile track there. I kept sliding out of the track and up to my knees. No running today. So I quick switched out of my New Balance Leadville shoes and Kahtoola Microspikes and into my Salomon S-Lap X-Alp Carbon and my backpacking snowshoes. Yeah, you don’t run in backpacking snowshoes. 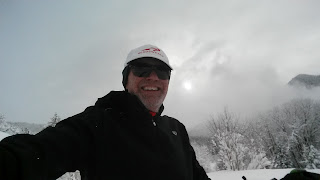 It was “smooth” going to say the least. It was good work heading up the hill and since I was way off on getting anything on Strava [Strava for this report HERE] I just forked into Granite Flats campground to check out the path up the ridge of Box Elder Peak that I could see in previous runs up here. I really want to do that. Not today though. The path was narrow and not tracked out at all. Sank up to my knees and tipped into the creek bottom, even on snowshoes.

I ran into some 12 year old Boy Scouts hauling sleds down toward the parking lot. They were a bit miserable what with the heavy snow and all. Seriously over 2′ up here. Amazing good fun digging snow caves and hauling sleds. Great to see the young ones hard at work up here.

On the way downhill I met another runner heading up in smaller, lighter, faster snowshoes. He had come up planning on running just as I had, but had a backup plan handy (snowshoes) and was going to make a 2 hour workout his new plan for the day. 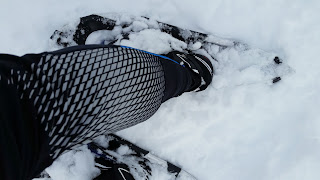 In spite of the storm it was actually quite warm, around 24F. I wore my Saxx Subzero wind front boxers, Underarmour windstopper tights, TNF base layer, and Pearl Izumi hybrid softshell fleece hoodie. I got in 2.5 miles in a decent, but certainly not fast time. Overall, great fun in a beautiful setting. I got in a rather gentle workout, and over the previous 7 days nearly 20 miles. 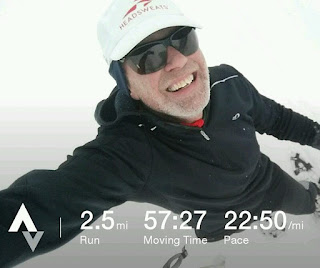