Skip to content
So here I am, after what seems like a rest week. Last week we did some trailer camping with the whole family in Yellowstone National Park over the Memorial Day Holiday. Didn’t get any running in, which I expected. This week I led a NICA Utah Mountain Bike League Coach Training workshop and we had a high school graduation. I had to work around my teen racer’s training schedule. We had company and enjoyed late nights and eating out some. 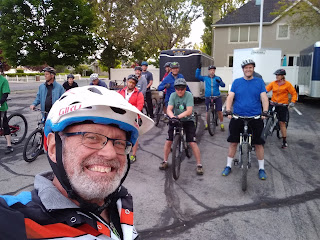 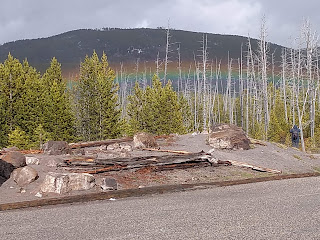 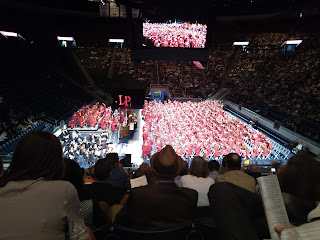 That made it difficult to get in my normal 4 AM training sessions, and even the evening sessions were very difficult to slip in between other stuff. Zwift was taunting me, with the last two events in the Tour of Watopia just scheduled so poorly there was no way I could get to them. Fortunately I got in the first five, so got the special Kit. But I have to keep reminding myself I’m not training to be a bike racer, so I have to just let it go and train hard enough to ride with the team, and provide some cross training for running. 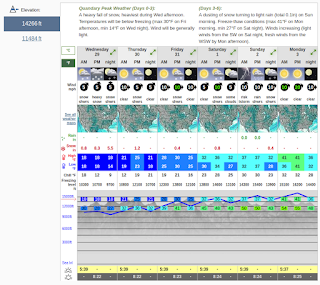 Quandary has been taunting me, with a first weekend of awesome weather since December. I had messaged the staff at the Broken Arrow VK about the recent snowpack, and they assured me that they’ll run in the snow, as fun as that might be. I figured training at Quandary would be a great way to possibly improve my performance and get my snow running legs back. Bad weather is irrelevant to that, since I can stumble along at 1 MPH in 40 MPH winds anytime without training for it.

We had scheduled a family trip to Quandary coming soon, and I’m nervous about the weather, again, stumbling along in high winds is just wasting effort and recovery time to prevent me from really training. I thought maybe I’d slip out alone this Saturday, but we have a family BBQ related to all the fun stuff we’ve been through the past few weeks. Since the weather is most likely going to be an issue next weekend, along with transportation issues, etc, it’s probably best to just not go at all.

Work has been “interesting” – yes that’s the right word. We moved into the new building on a temporary occupancy permit, giving us 90 days to finish the construction while we all sit here with marginal services. There’s no cold water. The fridges don’t work. There’s no place to sit and relax while eating. The desks are all criss-crossed with wires all over the place. A few select of us have our monitors pointing toward our micromanaging overlords so they can see when those of us not related to them are doing something other than buying Ferrari’s for them. Contractors saw and screw and chop and put ladders over our heads. Yeah. Fun fun. And the new location makes driving a little bit more troublesome, especially in the afternoon.

It’s really fun to take up a blog post on whining, and I have gotten in a few miles of training this week. Not as much as I would have hoped for a few weeks out from a race though.

I think I need to add in more long runs, which at my elderly shuffle pace means 2-3 hours for 8 miles or so at a decrepit power or HR output. I also need to get in some hill repeats, assuming I can get outside sometime. That’s been super tough with all the rain and snow and lightning and mudslides. I hope that spring time has finally arrived on the Wasatch Front.

This morning I was planning on running with an evening ride. That was to interface nicely with a family member who was behind in their training and needed to start riding by 4:30 to get it done and off to their day commitments on time.

I decided to try a Broken Arrow simulation and set the Stryd app to 24% and thus the treadmill to 24%, and walked at about a 230+ Watt average power for 70:00 minutes. 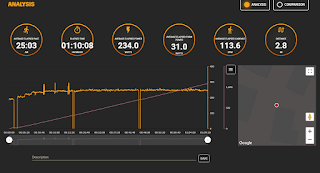 I managed to get in 2.8 miles, 3550′ of elevation gain, so right about spot on for the Broken Arrow VK. It was tough, and I’m sure it messed up my Stryd Power Center stats, especially for the Improve tab, but I need to figure out how to crank out 270+ Watts in 70:00 in the wild if I want to achieve my goals.

It also means my calculated CP (running FTP) of 222 is somewhat under-calculated. That means I should only be able to crank out 222 Watts in about an hour before it drops off. Yeah.

The big trade-off here is that it’s difficult to do this math in regards to power-hiking (fast walking) at 24%. In fact, outside in the wild my 750+ VAM efforts report less than 200 Watts. Anyway, it’s a pile of numbers to make charts and graphs and stuff to help me prepare. It’s all good.

Managed to tweak my hip muscle moving my own desk items and chair from the old office to the new. Either that or crawling around under my desk trying to get it all connected with a working internet connection. It’s tougher than it needs to be. Especially considering how ridiculously over-priced the place probably is.

Did a route in Watopia (Zwift) titled “Out and Back Again” and set a handful of PR’s. That was nice. My hip hurt a lot causing me to attempt really good posture to alleviate the pain somewhat. I also used my Selle SMP Hybrid Cycling Saddle which is a really good fit for me and my style of riding. I have another just like it on my main mountain bike. It’s padded just about right, and while it’s supposed to be a  “sit in it and don’t move” kind of saddle, there are actually a lot of positions in which it’s comfortable. Just sayin’. 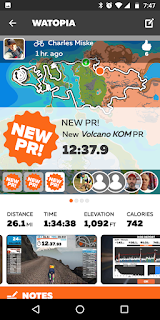 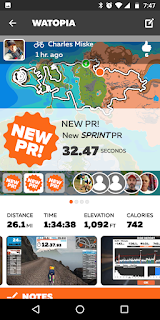 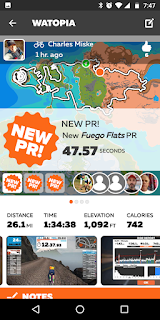 I ride like this, for the most part in HR and power Zone 1-2 as my cardio when I’m doing higher wattage power hiking. Seems to have worked good over the last few months.

Today was interesting, to say the least. Work has been a struggle, as we’re moving into a new building which is apparently an owners’ wet dream, but downgrading the employees even more than in the current building, if that’s at all possible. I won’t go into details, but right now we’re sitting elbow to elbow at kids picnic tables holding hands, singing Kumbya, and getting nothing at all done. The Google studies this nonsense was based on used interns (slave labor) and they believed that if they were super productive they’d get their own offices, but instead were let go at the end of their counter-intuitively productive runs. 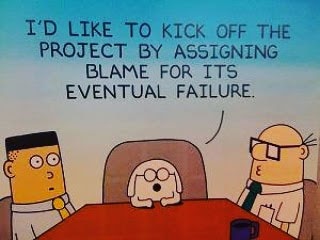 That stress has been difficult to overcome, and has led to a reduction in recovery, which is an expected result. 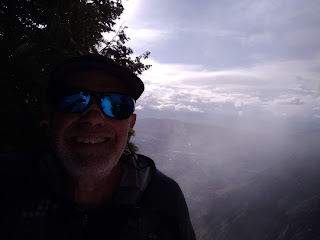 On top of that I’ve bumped up my outdoor running, shooting for various VK-Like ascents in the afternoon. In spite of the snow and slime and mud and muck and 30 degree spring weather. In both cases of recent attempts I’ve had to bail after 2400 to 2600 feet of ascent. One for a creek running down the trail and the other for slushy snow over slimy mud at the edge of a seriously 500′ vertical drop onto Hwy 92 up the Alpine Loop Road. 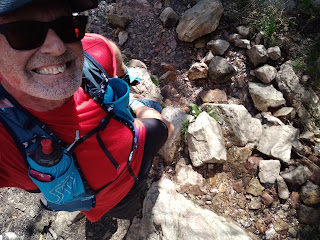 On Saturday I ended up riding the Eagle Race Course on my mountain bike, leading a group slowly around on a warm-up lap for a Time Trial attempt at the Varsity Team. Oddly that resulted in some awesome heart rate bumps, since it was effectively a maximum exertion full body workout that I wasn’t much used to. I haven’t ridden outside since December, except for the bike skills classes I lead for the Utah NICA League. 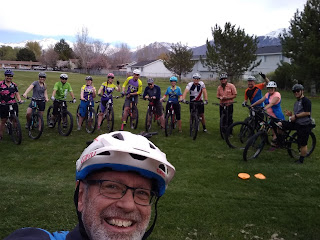 I’ve been doing a lot of Zwift, and even that has taken a hit lately with the outside steep runs added into my training. I’ve noticed that running up the hills, trying to emulate a VK, that I start getting slower and weaker in a couple of steps at 60, 75 and 90 minutes. I need to train around that, so looked at my Stryd to calculate what a good gap would be for a 90 minute effort, and decided that if I could get on the treadmill at 21% and hold it there at 220 watts for 90 minutes I’d be filling in one of those gaps. 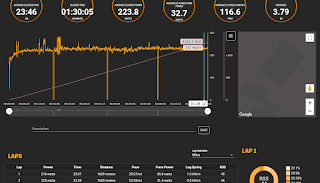 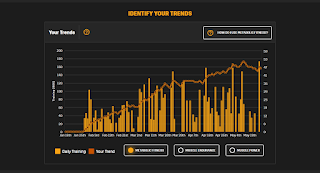 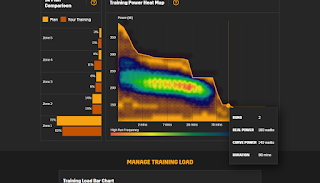 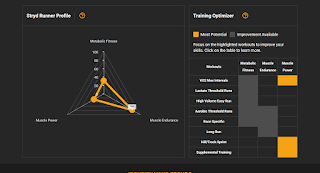 [Stryd Power Center screenshots to think about]
Like I said, I had a bad night and worse morning, without really good quality sleep so I decided not to get up at my usual 4 AM and instead slept in till 5:15. Nice. But I’m really pretty well behind. So this afternoon after work I did it. Did 3.8 miles and 4200′ in 90 minutes at 21% averaging pretty dang close to 220 watts. 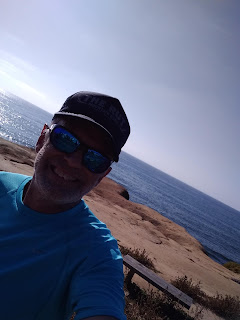 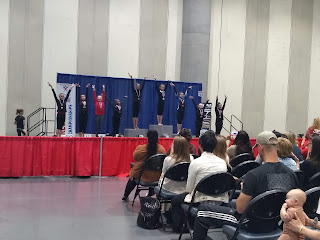 A few weeks ago I had the opportunity to take my daughter to her Gymnastics Regional Meet in San Diego. While there I got to run at precious oxygen rich sea level and hit a one mile PR. Nice. It was inspirational. I also got to do some serious hill climbs in the area around Sunset Cliffs.
BTW: I was watching Anime on Amazon Prime Video while on the treadmill and in the sauna.

Anyway, just thought I’d take a few minutes here to catch you up on what I’ve been doing lately. I’ll try to spend more time here in the next few months as I prepare for my most important races and events this year.

Please subscribe and don’t miss the next few posts, okay? 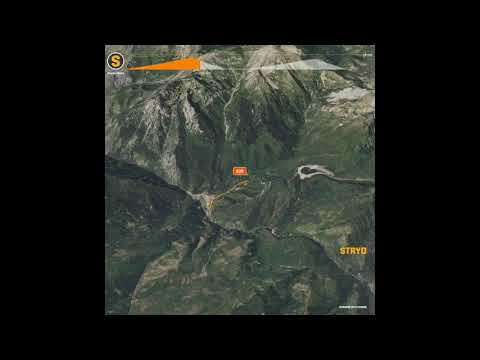 I was doing a pretty stiff pace uphill, totally booking it downhill and I did two laps of that. Recorded with Suunto 9 Baro, exported to Stryd, then exported video to iMovie and here we are.