Skip to content
Posted on June 17, 2019 by Charles Miske
Quoted long-form from this article:

The sport of VK running is relatively unheard of in Australia. It’s a Euro thing that is quickly gaining traction as trail and Skyrunning grows around the world. The International Skyrunning Federation defines it as follows: “Races with 1,000 m vertical climb over variable terrain with a substantial incline, not exceeding five kilometres in length.” The shortest VK in the world, which incidentally is also the fastest, is in Fully, Switzerland. It’s 1.9 km in length, with an average incline of 52% Essentially, vertical Kilometers are all about super steep mountains where an athlete has to maintain a steady state at close to maximum exertion for anywhere from 30 minutes (For the best in the world!) to an hour.

Training for such an event requires very specific sessions and to get the lowdown on what to do I asked some of the top guys in the sport. The consensus was fairly clear:

1) Start by gaining some experience and strength on big hills. Do lots of general runs, up to 2 hours, where you focus on consistent rhythm when climbing and get to understand what your limits are and at what point you are tipping over the edge.

2) Once a foundation of general fitness and strength is laid, introduce 2 x weekly sessions, one being hills reps on really short but steep climbs (EG: 10 x 60 secs). The steeper the better! The other should be on longer climbs, up to 20 minutes (For example 3 x 10 mins or 2 x 20 mins).

3) Weight training, with emphasis on power, not endurance should be done regularly. However this is should be introduced gradually into a program. Running should always take priority and a good base of mountain training is necessary before introducing gym work.

The above is a very basic guide. On the days between the hill-specific workouts, it’s good to maintain a connection with some flat running and speed. A weekly long run of up to 2:30 hours is also important to build fitness and endurance. Cycling can also be a good addition to compliment the running.

(minor edits for formatting that made it tough to read)

So yeah, I’m a bit weak in a few of those areas. I was doing some short hill sprints earlier in the season, but right now I’ve been mostly focused on getting increasing weekly vertical goals in. This has brought my weekly miles down a bit, since it’s tough to get in 30 mile weeks at 3 mph. That’s my average speed at 22% on the treadmill. 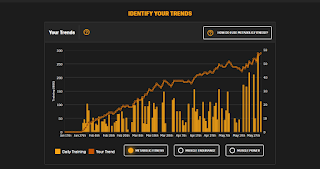 I’ll be posting more of this training specific information as well as condition updates for Squaw Valley where the Broken Arrow Sky Run VK will be held. Stay tuned please.