Skip to content
Posted on December 13, 2018 by Charles Miske
Had to wear my Kahtoola Microspikes this morning. There was a little bit of snow that started last evening at about 35F and transitioned into a freezing slick surface as the temperature descended with the sun. Check out the pic with my spikes and the frosted sheet of thin ice below. 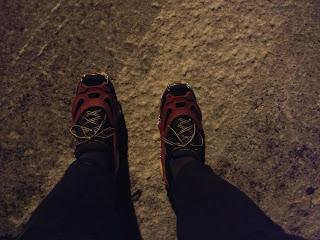 I ran on the recpath as it circled the Cedar Hills Golf Course hill section. It’s a common route for those living within a mile or so. It’s a bit dark back down by the creek and ponds. I love the sounds of the creek rolling over the rocks. Every now and then you see the glowing eyes of various critters ducking into the foliage as your headlamp beam reveals them.

It has been really cold and damp. A damp cold. The worst kind that settles into your bones. Today was a little windy, which made it feel worse. I wore a slightly thicker base layer top and it seemed to work while running. While walking the dog prior to the run it was sure cold.

In Seattle my heart strap for my Suunto Ambit 3 Peak had decided to become dead. Not sure if it’s the strap or the sender unit. I replaced the battery and still no go. That’s why I didn’t record heart rate on Cougar or Tiger Mountains, and why I’ve been mainly using the Tickr Run. 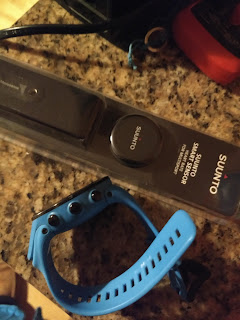 I had gotten a replacement strap and sender combo last year when I thought I’d lost mine, and I finally found it in the secret hiding place I’d never forget. Today I opened it up and it paired instantly. It should, being a fellow Suunto and all.

The main reason I had to get this bad boy up and running is that I am going to run Quandary this weekend. The Wahoo Fitness App is good. It works. It records some interesting data from my Tickr Run sender. Some of it only when I’m moving fast enough. The problem is that cell service is spotty on Quandary. I know the places where it is generally consistent. That’s not too much of a problem though, as the packet can be resent to Strava later when I do have good service.

The main problem is that some notifications and any use of the camera can cause the app to die a miserable death. Sometimes the data is recoverable, but sometimes Strava spits it back and says it doesn’t taste right.

So I can’t take any pics on Quandary or send and receive texts Usually I take a bunch of pics if my hands are warm enough. Generally I text my wife progress reports. So I don’t really want to be using the Wahoo Fitness App on Quandary.

That leaves me with having to locate the heart strap. I did. I tested it this morning. Now I’m happy. 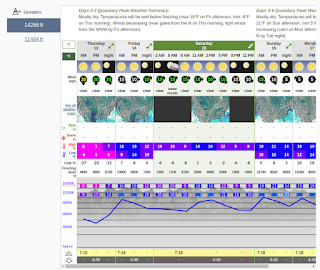 On another note – Elbrus access might be easier as the US State Department seems to be no longer recommending against visiting the region: Story Here